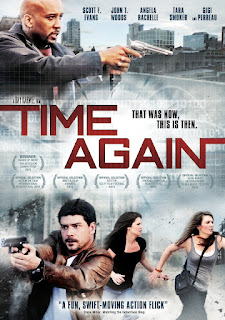 Time Again is part Timecop, a little Groundhog Day and a whole load of action packed fun that rarely stops for a breather during its 80 gun blazing minutes. Made on what appears to be a shoe-string budget, Ray Karwel doesn’t let this damper the sense of fun in this barmy tale of ancient coins that hold the power to ruling the world, time travel and shoot-em up action. Said coins are stolen from Mr Way (Evans), a deadly criminal who wants them back by any means necessary. Tracing them to a local diner where they have ended up as a tip for a waitress, Sam (Smoker), Way and his minions lay waste to the diner and kill Sam in the process. Six month’s later, Sam’s sister Marlo (Rachelle) is still hoping Sam is alive, as the authorities never recovered a body. And with the nifty sci-fi slant and the help of a kind lady (Perreau), Marlo is able to hop back in time to see if she can prevent her sister’s killing and stop the powerful coins falling into the hands of Mr Way. 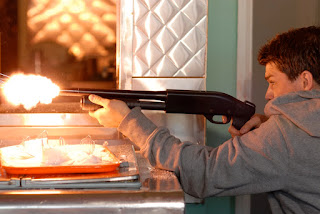 Time Again is a fun ride. Sure it’s a little kooky (the old lady complete with funky hat who sends our heroine on her time travel adventures!) and rough around the edges (the budget is a little limited!) but that doesn’t hinder the fun times the film delivers and the momentum never dips. Karwel keeps the pace and his characters peppy and the time travel concept does lead to much fun with Marlo being sent back repeatedly only to keep seeing her sister being killed. Along for the ride is a gun toting cop (Woods) who, well, gets to dispense a vast amount of ammo as he tries to protect Marlo and capture Mr Way. Time Again is packed with gunplay, with numerous shoot-outs breaking out every time Marlo is sent back in time. The action scenes, while not overly intricate, are excitingly staged and dole out a satisfying amount of shell cases in numerous gun-blasting exchanges. There is a pump action heavy confrontation in the diner, a neat gag with (what appears to be) a large rolling cable wheel and a very funny running gag with one of the bad guys always getting shot in the face. 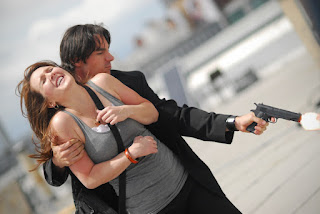 Karwel and his cast inject a sense of humour into proceedings with some witty banter exchanges between Rachelle and Woods, the bad guys are suitably boo-hiss but also seem to be having fun and everything moves at such a clip from all the gun battles to all the hopping back and forth through time, it's hard not to get caught up in the rollicking fun. Karwel wisely keeps the film moving and we are never far away from the next shoot-out or fistfight. The cast seem to be having a blast and certainly throw themselves into the action scenes. Some may find the time travel aspect a little jarring as a kindly woman showing up at regular intervals to send our heroine back in time doesn’t always gel with all the running and shooting action. 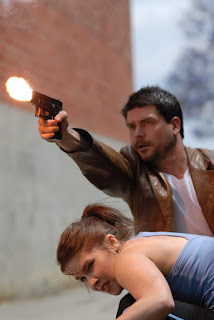