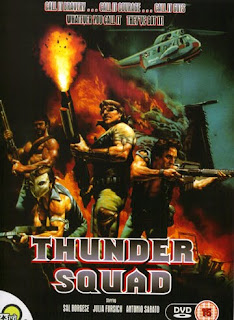 Italian shock master Umberto Lenzi is well known for his gore soaked shockers The Man from Deep River, Cannibal Ferox and Eaten Alive but made just as many action pics as he did horror ones. Thunder Squad is perhaps one of the lesser known jungle based action flicks and isn't as insanely wild or over-the-top as the likes of other Italian action flicks such as Strike Commando or Double Target but is still a fun romp through the jungles with a heavy dose of machine gun action.

Short and sweet it gets straight to the point when the son of some important dignitary is kidnapped and held hostage within the bowels of the jungle. So Antonio Sabato (Tuareg Desert Warrior) and his rag-tag team of middle aged special forces dudes (consisting bizarrely of a British chap, a German and the most stereotypical Italian: mamma mia!) are called in and once they've proved how bad-ass they are (by kicking the crap out of some young soldiers) and recruiting (and perving on) a foxy babe who just happens to be an explosives expert, they head into the jungle to rescue the young nipper. But double crosses, the unrelenting jungle, the need to constantly take a break to rest (well, they are middle aged afterall) and the fact the kid they rescue is more resourceful and better at saving the day than they are, all conspire against them as they attempt to complete their mission. 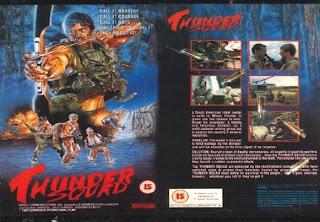 Silly and rather tame compared to other Italian action fests, Thunder Squad is still a cheap and cheerful Lenzi flick with some cool location work, ample cheese and a fair share of firepower. Nothing really revolutionary happens and the pace is a little more laid back, what with the squad all at least well into their forties and even pushing fifty meaning proceedings more amble along than explode at breakneck pace. Not that this is a problem as there is lots of overacting, requisite cutaways to shady dudes in suits doing all the double-crossing, a hammy villain and come the final half hour lots of bullets being sprayed.

And this being a cheap Italian action flick from the 80s there is also plenty of absurd goings on to keep the entertainment value flowing. Like what? Well when the team take out the group of trainee soldiers near the beginning they kick the crap out of them while high-fiving each other as if they are out playing lazer tag or something; once they are done perving on the foxy lady recruit they allow her to join the squad but only after she has survived being inside an exploding building, which she somehow does survive and just walks out waving like it's the most natural thing in the world (!); and the fact that the kid they go to rescue (who is an annoying little twerp) ends up saving the day and gets most of the squad sent to rescue him killed. Brilliant. Oh, and there is lots of hilariously awful dubbing and non-acting.

Considering it's a Lenzi flick the violence is rather toned down save for a few bloody squibs. A lower key, less violent but still barmy Italian action flick there is some action fun to be gained from Thunder Squad. 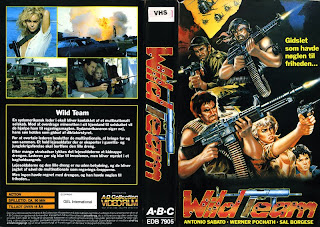 This looks pretty fun. I'll have to keep an eye out for it.

Gotta see this one! Looks Awesome! Great title too.

yeah it was a fun Italian jungle action flick, though it didn't quite live up to the promise of the awesomeness displayed on the covers. still pretty cool though...