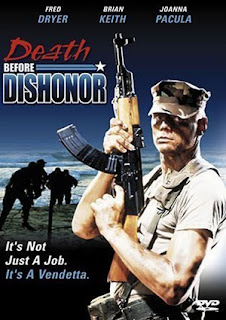 Typically gung-ho, middle eastern actioner from the 80s starring TV's Hunter, Fred Dryer, as a typically gung-ho marine. He's one of those types who is right about everything, is always fighting his incompetent authority figures, all his trainee marines think he is just swell and, by God, he loves his country. Stationed out in the Middle East, he leads a security detail assigned to an American Embassy. It's not long before some distinctly shifty terrorist types steal a cache of American weapons, take some hostages and blow up the Embassy. So what's Dryer to do. Well, go after the goddamn terrorists, ignore all other orders, take two wet behind the ears rookies along with him (so one can inevitably die!) and blow some shit up, military style. 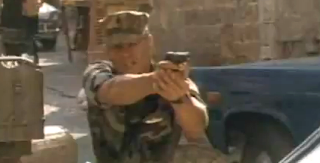 Death Before Dishonor isn't bad (if you like 80s gung-ho military action films) but is just a little too average overall. A tad too serious to be taken as silly action nonsense but still containing a fair amount of cheese to stop it being taken as a serious military thriller. Fair play to the makers as they've at least tried to make a more serious action film even it fails in these ambitions. The flick is well made and nicely shot and they try to build up a bit of character and tension before all the machine gunning action. Unfortunately the bad guys are stereotypical Middle Eastern villains just waiting to be slain by the American hero and would perhaps be more at home in a James Bond flick. Dryer is alright, as the no-nonsense Gunnery Sergeant, adds a little personality to his gung-ho character and, of course, gets plenty of cheesy one liners ("This isn't your war." "It is now."). Future Kickboxer sequel star Sasha Mitchell makes an early and enthusiastic appearance as one of Dryer's soldiers and thankfully come the second half there is plenty of bombastic action.

While the film is not as action packed as one might expect, there are still some quality firefights all of which are tightly staged. The action, save for one ludicrous stunt in the final action scene, is never over-the-top and full of machine gun fire and shot gun blast with a requisite amount of explosions. The flick also features a couple of nasty torture scenes including a particularly harrowing one where a power drill is used to painful effect on someone's hand. In fact, Death Before Dishonor still packs a violent punch and while it isn't always as exciting as it should be, and often a little cheesy, it's still a mildly entertaining 80s military action film. If you like those sort of films. 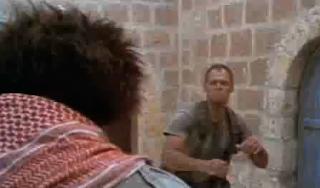 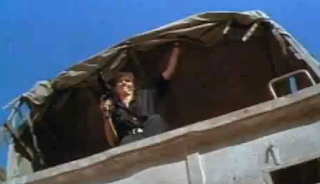 Definitely agree with your review! Very silly movie. Watched this a long time ago...but i think there was an A-Team type jeep stunt at the end.

yeah the end stunt with the jeep is very cheesy...the whole thing somehow just falls apart and everyone dies !!??...