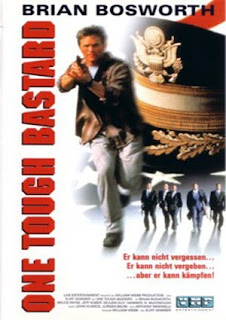 While the film contains its fair share of violence and revenge fueled action, One Tough Bastard doesn't quite live up to that awesome title. A title any action film should embrace and exploit to its maximum potential. One Tough Bastard certainly starts with a bang, John North's (Bozworth) family violently slain by Marcus (Kobar), a sleaze-bag working for corrupt cop Savak (Payne). North's family unfortunately happen to stumble across an arms deal that Marcus is in the middle of, on the behalf of Savak, and are thus dispatched accordingly. Predictably and following action movie standard, North goes on a one man rampage to get the killers. 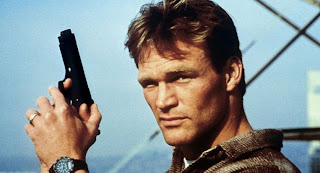 Unfortunately, after the initial 20 minutes or so it never really feels like a rampage. In fact, One Tough Bastard never feels like just one film. Swaying from action, to drama, to even exploitation on occasion, One Tough Bastard is all over the place. As well as the man out for revenge plot, the film throws in a sub plot about a kid Bozworth makes friends with and has to set on the right track. No goody two shoes, cutesy kid but a foul mouthed, drug dealing, gun toting 12 year old. He's actually well played by the young Dejaun Guy but his introduction and scenes with Bozworth just drag everything down somewhat. It's certainly a noble attempt to introduce more character into a cliched action film, and their scenes are well acted, but too much time is taken up with their drama when Bozworth should be getting down to being One Tough Bastard.

Still, the bad guys are pretty cool, if completely over-the-top and looking like they walked in from some other movie. Ok, so Jeff Kobar is your typical sleazy action bad guy (and pretty good too) but Bruce Payne is all out barmy. Complete with 80s rocker hairstyle and two nose rings we are supposed to believe he is some kind of awesome FBI agent. What!? Since when could they walk around with massive hair, piercings and ridiculous suits. To be fair, Payne is actually pretty good, brings requisite menace and throws around his dialogue like he's chewing his way through a hard-boiled detective novel. They just should have given him a different appearance to be taken seriously. 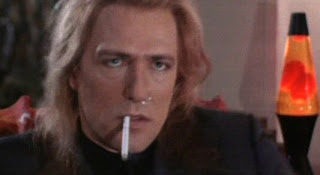 What action there is, is shot and cut well but seems to always promise more and bigger set-pieces which never arrive. This being an early directorial effort from Kurt Wimmer (he of the awesome Equilibrium and the not so awesome Ultraviolet), his style is already evident despite the bland look of the film, with scenes shot and cut for taughtness and his actors all delivering performances of a better standard than usually found in a direct-to-video actioner. Even MC Hammer isn't that bad in his couple scenes as a drug kingpin. Oh yeah, MC Hammer is in this film. What the!!??

While it's not a complete disaster and even pretty good in places, One Tough Bastard is just too all over the place to be fully satisfying for action fans. It see-saws wildly between drama, over-the-top weirdness and violent exploitation (with several kids getting gunned down during the running time) meaning there were probably too many cooks involved in the making of it. And for a film called One Tough Bastard there should have been at least one scene of the hero tooling up with weapons (he is a soldier after all) and going after a never ending supply of useless goons. 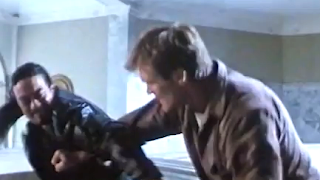 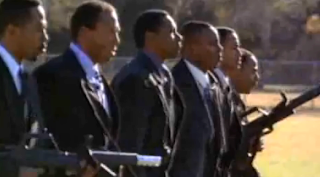 I agree, this was a disappointment to me as well, especially due to the lack of action. Another issue I had was how Bruce Payne affected a New York accent. This seems to happen a lot, and it irks me every time. Why not have Payne go with his natural voice? It sounds so much better.

yeah, wanted to see this for ages and was disappointed. not bad but not what i expected. has Payne ever used his real voice??...

I thought this movie was awesome. It made me a fan of Brian Bosworth and Bruce Payne. Jeff Kober was also good. Others have some criticism, but i really liked it.