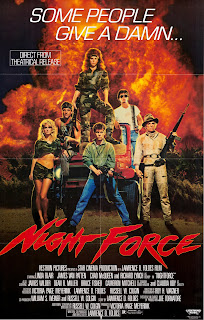 I have a huge tolerance for bad action movies. Especially bad action movies from the 1980s. They can be as cheesy, far fetched and just plain ridiculous as they want and I will enjoy them. But Nightforce pushes even this reviewer's tolerance for shit B-movies as it's just so ridiculous that it's, well, shit. Even with copious amounts of alcohol and watching it with other like-minded B-movie aficionados might not make Nightforce any more of a fun experience but then again if I'm suffering another bout of insomnia and ingesting large amounts of booze I might watch it again. Actually, it is kinda goofy fun. Wait, no it's not, I can't start liking it, this movie is awful.

Maybe it's the 80s cheese, or all the stunt men running around firing machine guns, or B-movie stalwarts Richard Lynch and Linda Blair that make Nightforce just tolerable. No, its just that its so mind boggingly barmy. So how 80s is Nightforce? Well other than having Richard Lynch and Linda Blair in the cast, there is also Steve McQueen's son Chad, everybody has insanely huge (and i mean, huge) hair, the film pretty much stops for the obligatory Playboy soft focus sex and shower scene (actually that's one of the good bits!), Cameron "I'm drunk" Mitchell is in it being, well, drunk and a bunch of douche bag teenagers can become highly trained soldiers by simply finding a bazooka in a junkyard and listening to Lynch playing the flute (!). No really. Lynch, who plays some tough soldier type, takes time out to play the flute for the young wannabe fighters and nobody bats an eyelid, like it's the most normal thing in the world, when in fact its the most insane, unintentionally hilarious thing in the world. Actually, all this stuff I've just written is making this movie sound pretty good.

If only it was. From all the inept action, including the world's slowest car chase, to a bunch of privileged white kids just cruising on down to South America in their product placement jeep and fighting and killing a ruthless militia like it's no big thing (see, you really could do anything in the 80s) Nightforce just blows. Oh hell, who am I kidding, watch this movie, it's hilarious. One minute people are being killed and raped the next minute the douche bag teens are just having a laugh like they are on some fun jaunt in South America killing people with machine guns.

Ok, having now written this review, Nightforce is in fact awesome. There is no way I'm throwing away my VHS copy. In fact, I'm gonna watch it again right now, just for the bit where Lynch asks one of the teenagers if he can fly a helicopter and the teenager thinks for a second before answering: yes! There being no mention of him being able to do this beforehand. Brilliant. God bless action cinema and God Bless the 1980s. 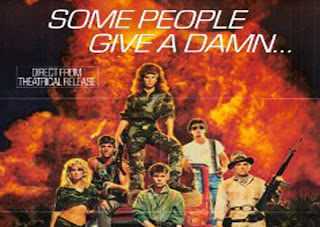 This is ok type film..I saw it last night and don't like it very much. it is good if you see it at home. Don't waste money on it.