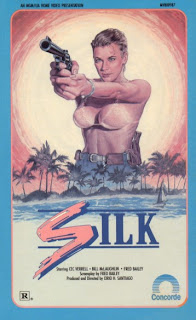 Mildly entertaining, low budget, Philippine shot action flick from the Roger Corman stable, Silk has just enough shotgun blasting action and a tough and sexy female lead to pass the time. The statuesque Cec Verrell (Hell Comes to Frogtown) plays Silk, the no-nonsense, maverick female cop out to bust some bad drug dealing dudes. Set in Hawaii but mostly shot in the Philippines, the flick is way too slow when the action isn’t flowing and too much time is given to the lame male characters. This is surprising, given the flick is marketed as a female action film but Verrell does handle most of the action scenes as she is arguably better at high-kicking and wielding a shotgun than she is at acting.

It’s all very low rent but undemanding fun if you are into these cheap and cheerful, trashy action films. Amazingly, followed by an equally cheap sequel, the imaginatively titled, Silk 2 starring Monique Gabrielle. Cool.

Really, this is just an excuse to post pictures of the VHS covers featuring hot women in bras holding guns. Awesome! 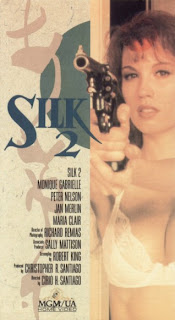