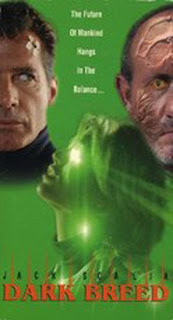 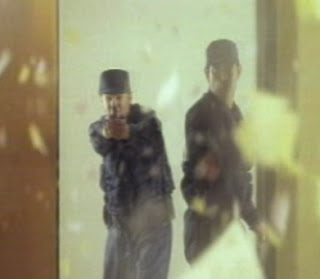 On the one hand, this tale of parasitic aliens who have taken over a US shuttle crew and crashed to earth with the intention of killing everyone is utter nonsense. Don’t come looking for Oscar calibre acting, as everyone acts straight out of a 1950s B-movie and lead man, Jack Scalia’s Vietnam flashback is about as dramatic as an episode of My Little Pony. Don’t look for logic either. Characters running around L.A. in NASA space suits with giant US flags on the back with nobody batting an eyelid, and giant bazookas being pulled out of nowhere to conveniently blow somebody or something up are just a few lapses in logic. It isn’t all about aliens and explosions though. The filmmakers have thrown in some drama in the form of Scalia’s marriage with his estranged wife, Deborah (Scott). The fact that his wife is one of the possessed astronauts is beside the point and the scene where Scalia argues with the alien about marriage while another character looks on as if it is the most normal thing in the world is priceless. Ken Loach this ain’t. 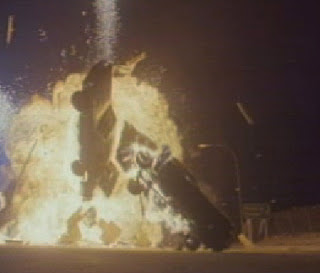 On the other hand, Dark Breed has a lot of energy and is good, action-packed fun. The 1950s B-movie vibe is evident in all the alien chasing and conspiracies and there are some pretty smart visual effects for this kind of film. As with all PM Entertainment films, there is a ton of great action. It hardly lets up, with shoot-outs, alien morphing and some excellent car chases. The opening chase is especially memorable with the aliens nicking a truck with a house on the back (like an earth-invading alien would do) while Scalia takes pursuit. It all falls apart come the end, with everyone running around aimlessly shooting at anything and everything, but there is enough action and explosions to keep any 14-year old boy or B-movie fan happy for an hour and a half.

Dark Breed is the kind of film only America could produce and, though not their finest, is a decent slab of sci-fi by PM Entertainment. It is best watched late on a Saturday night, in true 1950s B-movie fashion, in a triple bill featuring two other PM sci-fi extravaganzas, The Silencers and The Sender. Brain meltdown is assured. 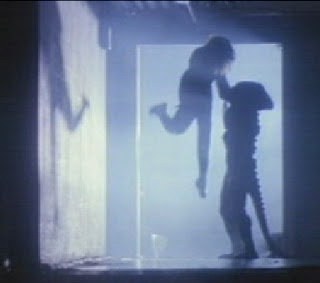 I watched a triple bill of Jack Scalia/PM Entertainment films(T-Force, Dark Breed & The Silencers) & i thoughrally enjoyed them in all their awful glory! This one in particular had some pretty awesome transformation scenes at the end. I wish i'd seen this film in the 90's when conspiracry theories about reptillian alien shapeshifters were all the rage! Great stunts, great effects, generous gore & plenty of laughs!