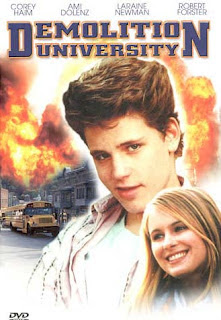 I have a high tolerance for low-budget action films from the Nineties. In fact, I love ‘em. Everything from PM Entertainment to Nu Image to the gazillions of kickboxing themed movies that flooded the market from the tail end of the eighties up to the millennium, I was there renting, purchasing and religiously watching them. I still do, especially with many now being released on (cheap) DVD. However, Demolition University pushes the limit even for mid-nineties, budget stretched action. 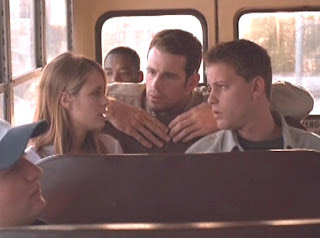 Unintentionally (I hope) hilarious and quite possibly racist in its depiction of Middle Eastern terrorists, Demo U fails to whip up any sense of energy or fun often found in these unassuming actions pics. Flat as a pancake in every department, from action, to direction to the sorry excuses for villains (what’s up with the evil American military dude? Is he supposed to be funny, evil or is he just having a nervous breakdown??). Director Kevin Tenney has made some great genre pictures such as his early horror hits Witchboard and Night of the Demons to the superb alien/action-fest, Peacemaker. Yet, he shows none of the flair or creativeness he displayed in those films. And the plot? Well, there just isn’t one. Now low-budget action flicks aren’t renowned for over complicated or thought provoking plots, and they don’t need them either, but actual motivations and story development are so thin on the ground it’s embarrassing. A bunch of terrorists steal some deadly liquid (or something) take over a water plant (or something) and its up to a bunch of visiting college students (well Haim and Dolenz) to stop them (or something). This wouldn’t matter if the flick delivered any kind of cool action, but it doesn’t. Aside from one decent explosion stunt, its just AK-47’s blazing, missing everybody and everything in sight. 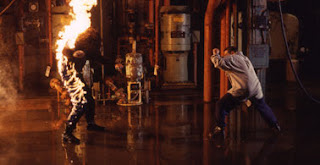 A sort of sequel to Jim Wynorski’s Demolition High (also featuring Haim), a university appears for all of five minutes before the “action” is relocated to the generic abandoned factory/warehouse/whatever, common in these low budget movies. Haim isn’t actually that bad (though what’s up with the eyebrows??) and Dolenz is easy on the eye if given little to do. Which is a shame, as she was excellent in Tenney’s earlier film, Witchboard 2 (and if you wanna see a film that maximizes its low-budget to full potential then check out Witchboard 2) and a decent actress to boot. Genre stalwart, ace actor and all round cool dude, Robert Forster is fun in his small role but even he can’t save this picture from the state of mundane is constantly finds itself in. 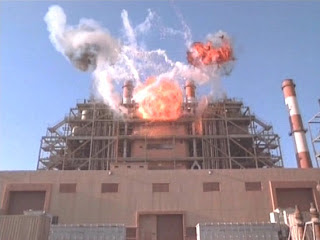 So having pretty much completely trashed the film, is there anything to like? Despite all the problems I had with it, I still kind of enjoyed it on a so-bad-it’s-good level. I will always love B-movies, champion them and though, yes, many can be so bad they are actually bad, a few bad ones are still entertaining on the most base of levels. Dolenz is cute, Forster is class, Haim is easy to watch and even on a bad day, Tenney is still worth checking out. In fact, take the time to check out his back catalogue (including the aforementioned flicks) and you’ll find some well-made, fun and creative B-movies.
Posted by drive2 at 06:02