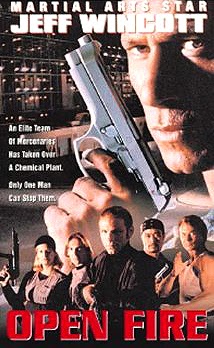 One time action star Jeff Wincott got his own Die Hard flick in the form of the very straightforward but nonetheless fun Open Fire. It’s that aforementioned action classic set in a chemical plant this time around, as a bunch of terrorist goons takeover said plant and threaten to blow it all up if their big bad leader Kruger (Kilpatrick) isn’t released from prison. He is, he joins his mob and they still plan to blow shit up and flee with the hostages. One hostage just happens to be the father of Alec McNeil (Wincott) who, wouldn’t you know it, is an ex bad ass cop and wants in on the rescue mission/negotiations. Prickly cop captain Taxier (Davis) isn’t having any of it meaning McNeil has to go rogue, breaking into the plant himself (which proves very easy!) in order to rescue his pops and kick some major ass. 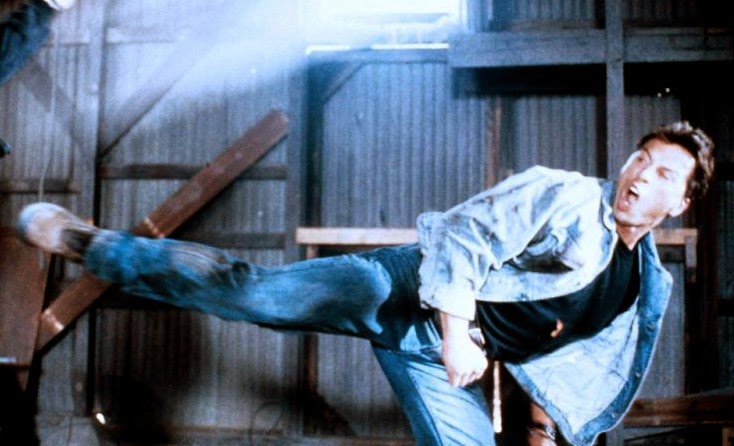 It’s fairly by the numbers and back in the 90s Die Hard clones were a dime a dozen but Open Fire is unfussy action fun for the less discriminating critic that coasts on Wincott’s likeability, Kilpatrick’s slimy bad guy and a smattering of decent action. It’s not as action packed as some of Wincott’s greatest hits (Martial Outlaw, Mission of Justice) and he does seem to be going through the motions a bit (where’s the eager kung fu cop from Martial Law 2 or the permanently on-edge-and-hard-ass-cop from Mission of Justice?!) but when it comes to delivering the bone breaking action he, well, err, delivers. With action choreographer Jeff Pruitt (Scanner Cop, Deadly Target) on hand the fights are lively, crunchy and hard hitting. An early fight in a bar (to show just how tough McNeil is!) and the final one-on-one with Kilpatrick are the standouts featuring flips, crashing-into-furniture-and-surrounding-objects takedowns and in one particular “oh hell yeah” moment, Wincott punches straight through a dude’s beer glass to sock him in the face. Awesome.

Kilpatrick (Death Warrant, Best of the Best 2) may have played this part a dozen times but he’s good value as the smarmy bad guy and proves a believable physical foe to Wincott’s hero. There could have been a bit more action and less dossing around with the incompetent cops but as a cheap and brisk Die Hard knock off, Open Fire aint bad. 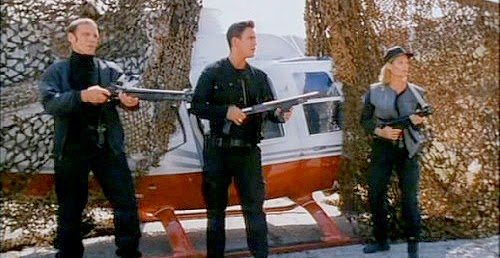